Founded in April 2003, the guild has flourished and become a dedicated group of basketmakers from a wide area, meeting 3rd Saturdays 9 am to 4 pm at the Chatham Cultural Centre. Each meeting features a basketmaking class where members share their skills with each other. Some of us are beginners, some of us are teachers, but all of us cherish the fellowship and sharing of knowledge that is a part of the life of a guild.

How did it all begin? My first basketmaking experience was in the mid 1980’s, a large egg basket woven on grapevine rings and ribs. The place was the patio at the London home of my new mother-in-law, the teacher was Betty Britschgi and I loved every minute. This was the London guild of weavers and spinners basketry study group and we were meeting each month to make a basket. I think there were 7 baskets under my belt before the group folded for lack of leadership (one of the baskets still isn’t finished!!!). We had been rotating teaching among the members and I remember meeting in someone’s kitchen one night (she is now a SOBG member) where Betty taught Amy’s Basket from Lyn Siler's book. 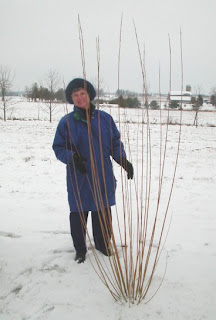 There wasn’t much basketmaking through the ‘90s but Betty Britschgi gave me some cuttings from cultured basketry willow which came from Edna Baker, a former London guild member, and today it is my main crop, Green Edna. In 2000 Ankaret Dean sold me cuttings and that summer Jule Koch gave me cuttings from her two favourite varieties. I was on my way to becoming a willow grower and weaver! Finally in 2004 the time was right for me to take my first willow basketry class. After one week with Sarah Kern at Haliburton, I found myself absolutely hooked on weaving with willow. That October I had a weekend in Nova Scotia with Swiss Master Basketmaker, Verner Turtschi and the following summer, back to Nova Scotia for a week with Heather Sanft, repeated in summer 2007 to rendezvous with Jane, a new friend from a guild conference in Windsor where we wove willow together. The travel continues, attended the BA's York Spring School this year and am scheduled to take a class with Jo Campbell-Amsler at the Sievers School of Fiber Arts in August. Jane and I look forward to visiting basketmakers in Denmark one of these years.

What joy I felt when the opportunity to attend “Basketry Spree in 2003” came up and even more excited when SOBG was formed at the conference! The guild retreats that followed were unforgettable, the friendships formed will last forever. Two more SOBG conferences, “Baskets & More in 2004” and “Catch the Spirit” in 2006 gave me the opportunity to learn from new teachers and make contacts with basketmakers who soon became friends too. Growing willow and sharing it with others has put me in touch with even more basketmakers. The annual native black ash workshops in southwestern Ontario have formed a fresh circle of craftspeople. My willow blog has been a great way to meet people interested in willow. Basketmaking has truly opened a new world for me – of travel, learning, creativity and especially of friendship.
Posted at 10:50 2 comments:

When setting up the year's program, a range of techniques and materials is covered, from manufactured reed to naturals and from beginner to intermediate level. Monthly meetings feature a class for members and guests. Here is the look of the program for the current year including a couple of classes that were cancelled due to winter weather. A few kits for the February onion/garlic basket are available for $15. 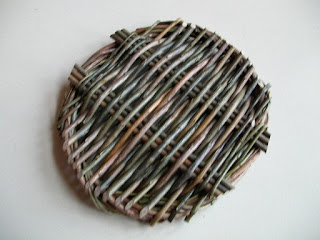 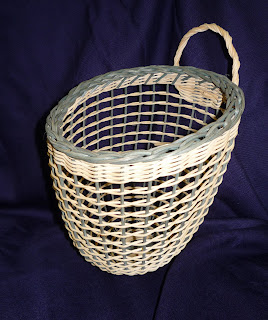 MARCH - Coiling on a gourd 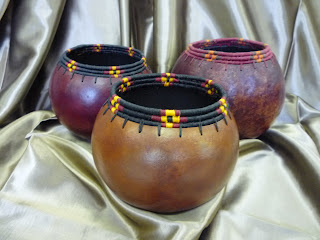 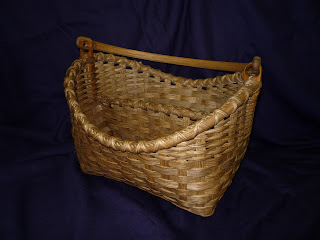 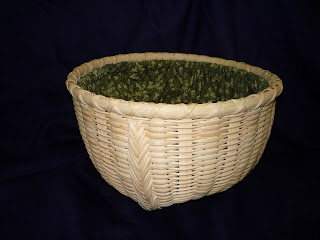 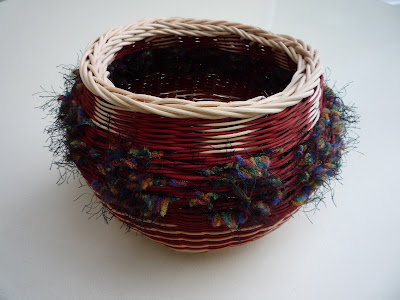 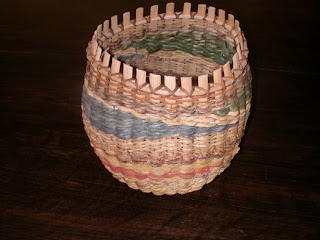 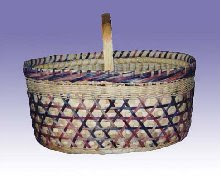 Some guild members are meeting in July to set up the 2010 program which will feature a number of rib basket techniques in a range of materials. Members please send your ideas to the Program Chair, Linda, or better still, come out to the meeting.
Posted at 12:11 2 comments:

This is an intermediate level basket but lots of help was available to beginners.

Every basketmaker needs a good tool basket. This one features a divider and a liner complete with pockets! The swing handle folds down out of the way to make it easier to find that tool. Nancy was our teacher but lots of mentoring was happening around the room. Here we are at work. Look for a class photo next month when all 16 baskets are completed! 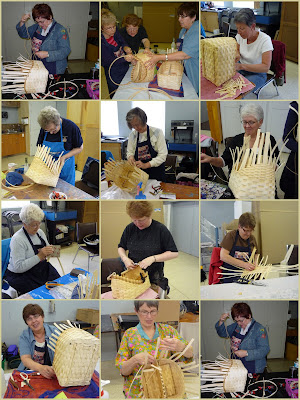 One of our Nancys 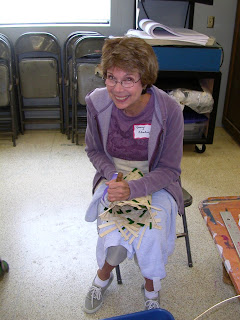 Yarn, thread, weeds, wood, all natural fibers have moved me, since I was child weaving pot holders under a tree on a hot day. Basket weaving for me started about 20 years ago on a hang gliding trip with Dolores von Rosen and our men. The men went off early one morning and Dolores drew me into her weaving web in a dim orange and brown motel room, where hanks of reed were hanging everywhere. Looking now at my first basket, the whole scene comes back and makes me laugh. After that day, she could count on me for years to attend her basket workshops.

When Dolores after retirement moved back to South Carolina, I decided to teach workshops in my basement for a few years, while continuing to learn from Grace Kabel and other Michigan weavers. The von Rosen friendship stayed alive with our US/Canada trips back and forth - always including basket weaving. One can never be skilled enough or run out of design ideas - I was hooked.

After retiring from 40 years of teaching special education, I became a more active member in the SOBG, and my basement stash of fiber is once again multiplying like a friendly monster no matter how often I cull. I am so lucky to have a guild within driving distance with talented, interesting, lively, and lovely people.
Posted at 10:32 2 comments: